BEASTMASTER 2: Through the Portal of Time 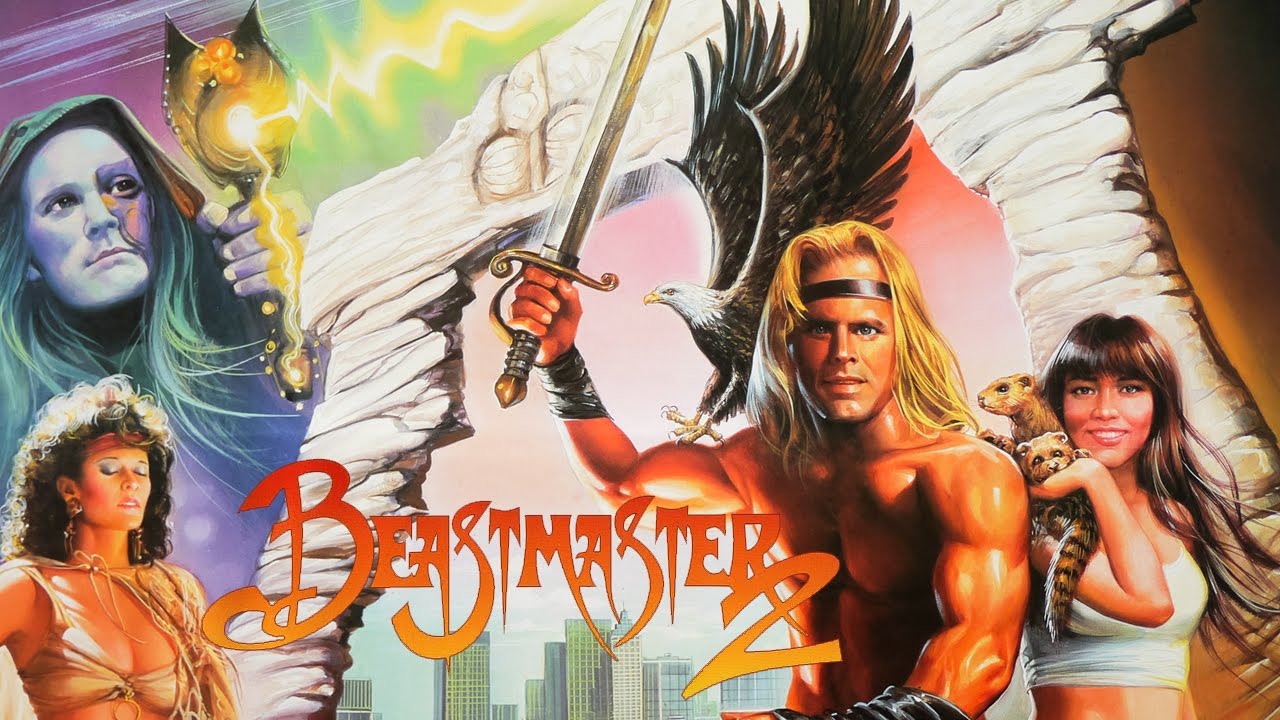 At points I feel criticizing and ribbing the sequel to the 1982 fantasy film Beastmaster is unfair. The franchise limped into the 90’s with all of their previous fanbase older and not interested in fantasy anymore. At times, I feel that this film has suffered enough slings and arrows of criticism that another one would just be useless. This, of course, would be true if Beastmaster 2: Through the Portal of Time was a few degrees above one of the most ludicrous films ever made. Move out of the way, I am going to try to do a roundhouse kick.

As previously mentioned in my Dragonheart review, the 90’s market for fantasy was a different landscape. As oppose to the 80’s, where fantasy filmmaking experienced a small renaissance, the 90’s found itself desperately trying to hold on to its audience. Where Dragonheart tried to wrap fantasy around a family film, Beastmaster 2 tried to make the idea of someone who claims kinship to animals humorous and hip. One of those things is true but the other couldn’t be further from effective. Where the first Beastmaster was full of escapist charm, the second Beastmaster tries to sidle up next to 90’s pop culture in one of the most asinine adventure ever made. Somehow a metallic glowstick which shoots lasers out of its sides is the least ridiculous thing in the movie.

The film finds our hero, Dar still entrenched in the conflict that marked the first film. Wait, I thought everyone was fine? Dar, who is still ripped but aged hard in the face, learns that he has an evil brother Arklon who is planning to take over the world because that is what evil people do. We know that the two are brothers because it is fed to us at the beginning but also because the two have the same scar on their hand, which sort of doesn’t make any fucking sense as in the first movie, Dar gets kidnapped from the womb of his mother who was a queen. Right? Do I really need to re-watch this to check the facts? Is there some sort of office I can write to file a complaint? What you do need to know at this point is that Beastmaster 2 isn’t terrible. The film still retains its clunky charm. This is true until they introduce the portal of time, which actually has nothing to do with time travel.

Oh yes, I believe I was discussing our masterful villain a minute ago. Along with his laser sidearm, Arklon wears a half mask to cover up a small gash left by Dar’s hawk at the beginning of the movie. Rather than sport a cool scar, which would add to an evil persona, Arklon is content in wearing what looks like a giant artichoke leaf on his face. Arklon eventually meets a witch, Lyranna, who annoyingly talks like a valley girl. Lyranna shows Arklon, for some reason, a portal to 1990’s Los Angeles. How we get from there to a great caper that involves a neutron bomb heist I do not know, but what is known is that this is the point when the movie goes from passively bad to aggressively terrible. Uh yeah. Guys. That isn’t a time portal. Yep, that’s right, Lyranna even said it’s a transdimensional portal. Did that not fit on the movie poster? Assholes.

And now it is time to meet one of the film’s prime agitators, Jackie Trent, played by Kari Wuhrer. As if the film was not awkward enough, we are given a heroine whose main goal is to make wise cracks in the form of pop culture references. This escapist disconnect is not only strange but infuriating as all I wanted to do was pretend I was a druid who could talk to bird. Trent is a Senator’s daughter, but do not let that confuse you as it never comes into play throughout the entire rest of the film. She could have had a cyclops for a father and it wouldn’t matter. Trent somehow goes through the time, er, dimensional portal and ends up in Beastmaster land with her corvette. After a deflated attempt at romance and some smoke bomb fights, Trent, Arklon, and Lyranna end up Los Angeles with Dar and his faithful animals on their heels. Leave now because this is when the film loses its shit. Dar, come on. Your better than this. There are some who really liked the first Beastmaster. Do not sell yourself short to a wider audience.

Rather than crafting a semi-believable story with Dar navigating an urban setting, the film takes a swan dive into a ball pit of tropes and cliches and is content in allowing near parody storytelling to helm it. When a film is more interested in fish out of water hero encountering television, eating cold cuts, and listening to rock and roll than it is about solving problems, things get weird. When a film thinks its a good idea for Arklon to go shopping for a fashionable suit in a boutique run by an effeminate store owner things go fucking bananas. Add to this a side plot of a neutron bomb, a spoiled rich girl, and a burnt out cop with his wormy sidekick and I either want to scream, laugh, cry, or all of the above.

Artichoke Arklon fools his way into a military base to seize control of the neutron bomb. After he acquires said bomb he dismisses Lyranna, the witch, as his side kick. Alright now is an important time to remember where the portal is. Why? Because Arklon wants to go back to his dimension and rule with one bomb, which is sort of unbelievable seeing how he needs to:

A) Know how to detonate it.
B) Explain to his people the power of the bomb.
C) Detonate it one time and hope who ever is left after the explosion believes Arklon can do it again.

This is actually believable seeing how the denizens of the world worship the corvette left behind by Jackie Trent (spoiler) but still is unlikely. Regardless, the film is pretty clear of Arklon’s motivation. Time dimensional portal. Bomb. World ruling. Oh Wait, we are going to the Zoo? The fuck?

For no apparent reason other than to strengthen his adversaries obvious power, Arklon goes to the zoo to end up in a duel with Dar. After Arklon is defeated (spoiler), the rich valley girl, the burnt out cop, his wormy sidekick, and a kooky old war general have to deactivate the bomb with hilarious results. Dar leaves Los Angeles for his own time because, ready for it, he has to return 5 years later for Beastmaster III. Oh for the love of Christ.

Beastmaster 2 tells us a lot of things. First, is how utterly disastrous a movie can be when you treat your audience like idiots. Listen, I understand the first Beastmaster wasn’t a shining example of cinematic art but it had the decency to leave a fantasy vehicle within the realm of fantasy. I almost want to blame the entire thing on the writing department but that was headed by Jim Wynors and RJ Roberts, who are near famous for their work in cheesy horror and softcore porn films. The Hills Have Thighs was my favorite aside from the Da Vinci Coed. At this point I accept Beastmaster II for what it is — an abomination that not only illuminates how terrible the 90’s were but also strengthens my love for the original.