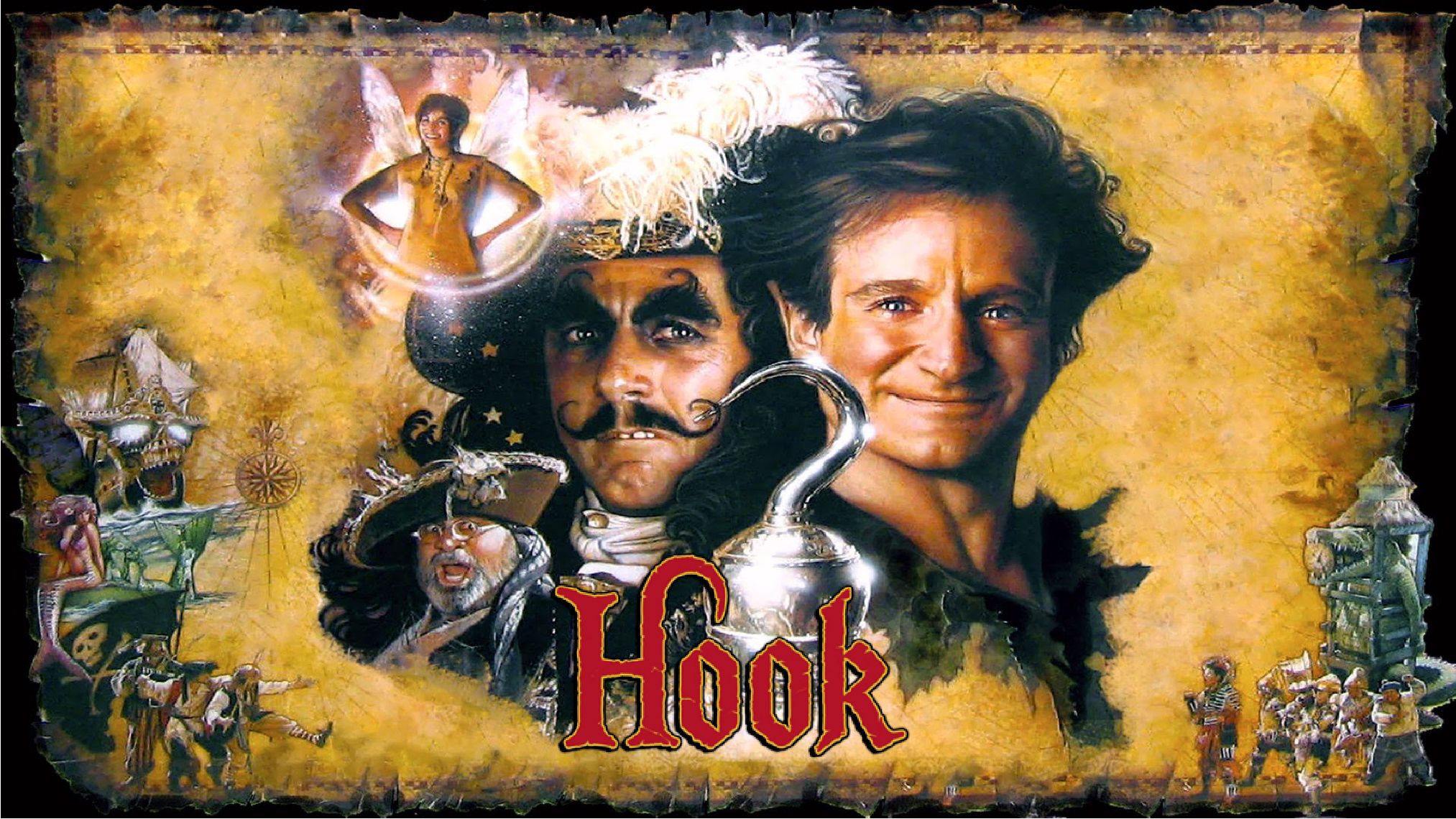 I think I can quote every line from the 1991 movie Hook. Well, I at least have a hazy recollection of what is going to come next. Why did I watch this movie so much when it came out? Hook, for me, is an exercise in nostalgia as much as it is a test of patience. Despite the film resting comfortably in my childhood as a fun fantasy adventure film about the wonders of imagination, Hook may be something entirely different once grown up. You see what I did? I recalled one of the films more popular themes. No? Go fuck yourself.

Framing Hook is an endeavor because Steven Spielberg, along with directing, was pretty much the producer of every other movie from the 90’s. Between Indiana Jones, the Last Crusade in 1989 and Jurassic Park in 1993 came Hook, an adaptation of a popular children’s fairytale. The film had a budget of 70 million dollars and pulled in A list stars from A list careers including Robin Williams (Post Dead Poets Society/Fisher King/ Awakening), Julia Roberts (post Pretty Woman), and Dustin Hoffman (post Rain Man / Kramer vs Kramer). The film’s score was produced by John Williams and the whole film was backed by Amblin Entertainment. Lock, stock and barrel, Hook was an avatar of early 90’s cinematic family entertainment. It could have either been a movie, a ride, or a toy line and it wouldn’t have mattered. Oh that is right, I have to watch this again don’t I? I am trying to decide who is less intimidating. These Lost Boys or the Lost Boys from the 1987 teen vampire film.

Hook begins as a routine family film portraying the age old story of an overworked father and the growing distance between him and his family. No bother about how his family lives in a nice house, flies to London on a whim, and participates in extracurricular activities. No, he should be with them, not at the office working hard. Bah! This is the early 90’s, the land of financial stability and media conglomerates. Anyway. Hook’s introductory story is pretty heavy handed on a pro family stance. In fact, since the film was released in December, the whole story is engineered to be a holiday Christmas machine churning out warm feelings like a snow blower. Oh, I’m sorry, am I causing christmas fairies to die?

Instead of retelling the tale of Peter Pan, Hook imagines the lead hero grown up in the real world as a lawyer. Overweight, tired, and short tempered, Peter Banning has to remember how to be Peter Pan in order to save his children from a very jaded and older Captain Hook. You see, this whole plot is interesting and actually sounds like a worthy sequel to Peter Pan had it been written by the character’s creator Sir James Matthew Barrie. The narrative for Hook sets itself up for some interesting interactions between the denizens of Neverland. One could think of it like a messianic prophecy unfulfilled, with the leader now a turncoat rebel. Even Captain Hook’s dismal existence as a villain longing for a nemesis that borders on suicidal depression is intriguing. Too bad every inch of interesting material is run over by legions of child actors who flood the screen with emotional corn syrup. I bet you can’t keep track of all the favors and political maneuvering that made this cast.

Suffice to say, Peter Pan finds himself fighting against his past and confused in Neverland. He meets the classic outlaw band of children called the Lost Boys who are now led by Rufio, or the guy who voiced Zuko in the Last Airbender. Pan has three days to get in shape and relearn how to be a child while Captain Hook slowly tries to corrupt his son Jack. This leads to a very long scene of Hook recreating the baseball game Peter missed where Jack finally feels special and Peter feels like an ass. Calm down. We are supposed to see this. The protagonist is suppose to have some character development in the form of a clunky slide up a ladder. I guess spending every moment with children rather than providing them the resources to lead a stable life is more important. Faeries are littered around me.

Alright I admit it, this scene profoundly started my fear of torture by scorpions.

The most redeeming part about Hook is when adults are allowed to come back into the shot. The adults, as famously said by Rufio the 90’s caricature of a hooligan, are all pirates. The end of the film has a large and elaborate fight scene with the Lost Boys storming the pirate ship and swashbuckling. Finally, a scene with someone over the age of 25. Robin Williams does not count. So, now, ask me how trained pirates are bested by children or how Peter, in three days, lost weight and became skilled at sword fighting. It’s a family movie, just shut the fuck up and eat your popcorn. Hook, probably the film’s most well rounded character, gets somehow eaten by a dead alligator and everything is fine. The end of the movie is literally a tearjerker where everything works out for the better and no one loses money because its the 90’s and everything is fine for at least another 10 years.

One of my largest problems with Hook, as a story, is that it falls in step with an army of cliches and well worn tropes of family entertainment. The montages are painful and the score swells at just the right moments leading to the well orchestrated emotional pang shots. There is even instances of clapping and cheering that make this whole thing seem like pornography for families and people who love to feel the special charm of them around the holidays. This is not to say that Hook isn’t enjoyable. If your idea of a fun night is watching children act and helping adults reclaim the spark of childhood, then yeah, I guess this is for you. If you enjoy watching A list stars make a movie that is the equivalent to a million dollar school play then yes, Hook stands the test of time. If you like swords and magic but dislike everything I just said then no, Hook should never be watched again.