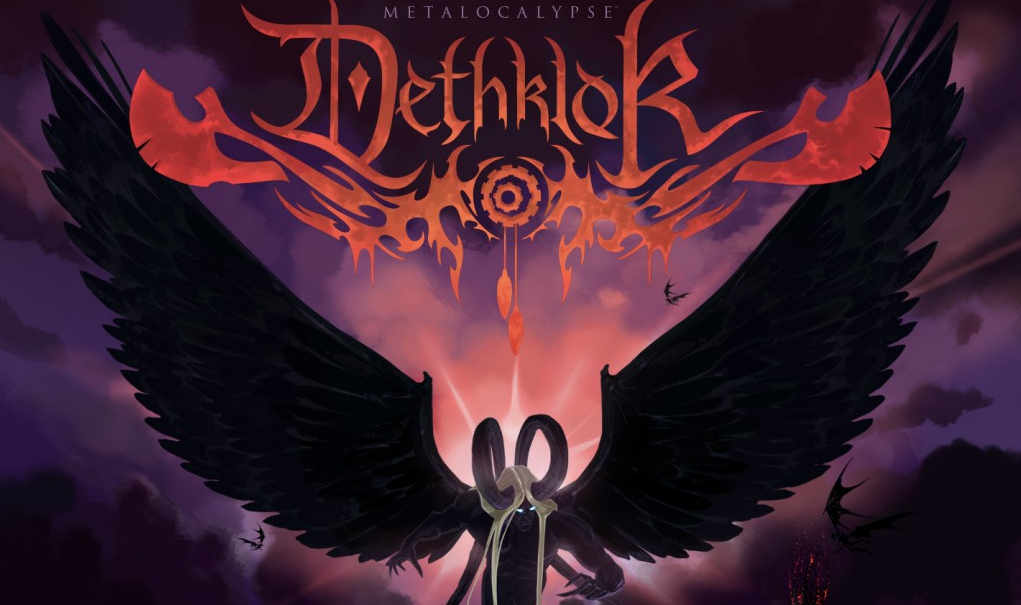 To be honest, the actual music from Metalocalypse was always my least favorite part of the program. I found the songs to be a clueless mess of Metal stereotypes: simplistic breakdowns, boorish riffs, death growls, and flashy lead guitars. Still, I found the evolution of the Dethklok project to be interesting – especially in light of their touring with Metal giants like Mastodon – and I was curious to see what Brendon Small and the gang had been up to lately.

I was pleasantly surprised to find that the answer to that question was: writing much better songs. The songs on this album are powerful, cohesive assaults of Melodic Death Metal that will make you question whether they were really written by the same people behind goofy parody songs like “Face Fisted.” Brendon riffs like he’s never riffed before on this album, drawing heavily from later At The Gates, although there are ideas lifted from a wide range of styles. There’s even a riff in Rejoin that could be on a NWOBHM album if it were in standard tuning. There are also plenty of solos, although they vary in quality, and his infectious guitar leads will be stuck in your head for days. Drum legend Gene Hoglan lays into some serious back-beats, blast-beats, and double-kick, all while very tastefully accenting the rhythms that Brendon is playing. Most of the songs on this album charge forth with an exhilarating synergy of primal fury and mathematical efficiency that will have you both banging your head and considering a degree in music composition.

These musical changes coincide with a dramatic lyrical change, as well, because while songs like The Hammer and Biological Warfare carry a certain tongue-in-cheek wit, most of the lyrics are indistinguishable from your standard Extreme Metal fare. This is something that might alienate longtime Dethklok fans, especially those who were more interested in the comedy then the music. Brendon also utilizes a slightly different growl on this album that I’m not entirely sold on.

Since we’re on the subject of flaws: there are vamps that go on for too long (as in Crush the Industry), endings that wear out their welcome (as in The Hammer), and guitar solos that don’t really deliver (as with the ham-fisted Fredrik Thordendal tribute in Starved). Then there’s the Metalcore dud Ghostqueen which should have been cut entirely. Speaking of Metalcore, there is still a love of breakdowns on this album, but thankfully they are both less annoying and less numerous.

Dethalbum III maintains a strong feeling of heroism and triumph, exemplified by songs like Impeach God, which is quite literally about charging into battle; Rejoin, which closes with a positively glorious symphony of guitars; and Skyhunter, during which Brendon bellows “You’ll never take me down/I’m alive!” This attitude is appropriate as this album is absolutely a victory for Brendon and Gene. I can’t believe I’m saying this, but I can’t wait to hear what Dethklok releases next!