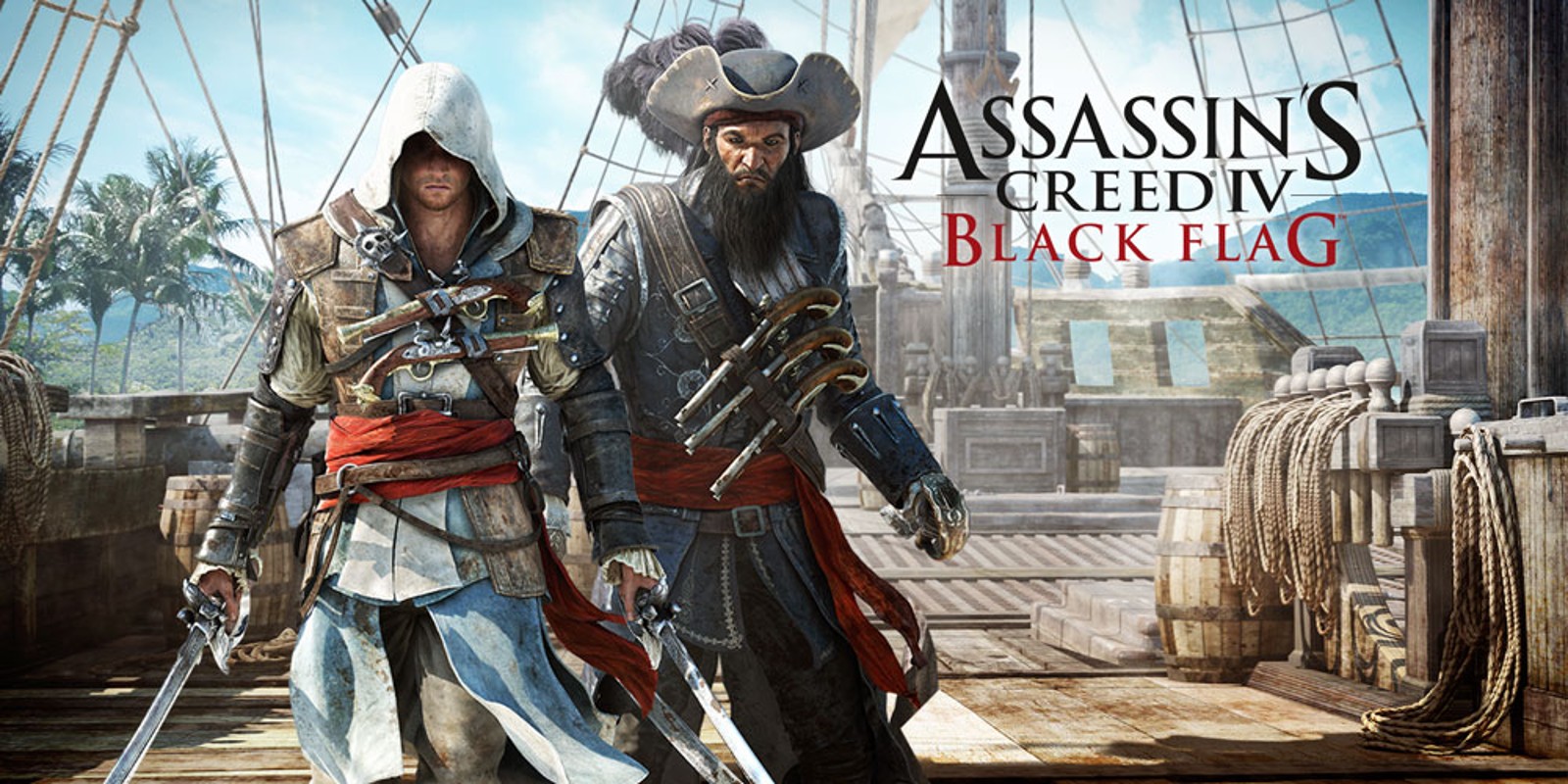 Assassins creed, If you’ve no experience with the series, is a alternative Metal band from the late nineties that became famous for such grungy hits as “Torn esophagus”, “One (knife in your throat)” and the game changing “what’s this life for? (If not Assassin parkour)”

Ok, I’m just messing with you. Creed are famously one of the least murderous bands in the world when it comes to the annual sacrifice of roadies (though they do get pretty wasteful with some Ban-Bons at about 2.40) And, of course, they’re not pirates either. That’s Alestorm.

Assassins Creed 4 is the sixth game in the assassins creed series (not counting the god knows how many portable spinoffs) and follows the adventures of Edward Kenway. An Irish pirate who is not an assassin, but is wearing one’s coat. It might be the loosest title-content relationship I’ve ever seen.

You’re not really him at all, though. People returning to the series will be familiar to the old bait and switch, and assassins creed 4 is baitier and switchier than ever. You’re not even series usual protagonist, earth’s most boring man, Desmund Miles. He died end of assassins creed 3 via a lethal exposure to excitement, which effected him in pretty much the same way matter effects anti-matter. Now you’re just some random jerk that Aspergo hired to make a videogame about pirates. Still, He’s still got more character than old Desmond, even if it does begin and end with “owns an Ipad”.

You get to have a casual chat with your victims in this abstract void, which is pretty weird when you consider you could probably use his throat as a flute

None of this matters, obviously. The actual plot’s of the Assassins creed series long ago disappeared up it’s own arse with a sound disturbingly like a mac starting up. Which probably explains why so little effort went into this one. “Got hired to make an assassins game about pirates” Sounds suspiciously like a company memo that one writer, his ability to give a shit long ago atrophied, mistook for the plot of an entire game. Ok, I just can’t stop taking the piss out of this. The plot’s of these games are always a bit of a fuckabaloo, but they’ve never been so lazy before. I mean, they’re always nonsense, but at least that’s creative. This is just so fucking nihilistic.

Like I said, nobody gives a shit. You’re some Irish chap who stole a coat, It’s not exactly Chaucer. The real draw is the setting, and Christ, what a setting it is.

It’s rare to see a game that takes such an absurd amount of advantage of it’s location. And as an open world pirate game, I wouldn’t be surprised if this became viewed as the open world pirate game. For starters it’s damn huge. You’re given the entire Caribbean to piss about in, and my god is there stuff to do. You’ve a ship, the “jackdaw”, there’s whole hours of game play just centred around improving and personalising her. There are sharks to hunt, and messages in bottles to decipher and shitty, hand drawn pirate maps to follow. There’s trade and pillage, and hundreds of random merchants to board, loot, and sink. It doesn’t always make much sense, though.

The maps, for example, look weathered enough, being generally an outline of an island with maybe a couple of landmarks drawn in. But just in case you were getting exited about a treasure hunt, they’re also accompanied by a precise latitude and longitude. This weird addition turns what could be an exiting adventure in exploration into nothing more than a unconventional fetchquest.

It’s a problem that gets pretty much everywhere, actually. There’s crafting now, but it’s the odd farcry 3 crafting system wherein each item requires an absurdly exact recipe. Only got deer skin?, well, that’s good for step two of the armour upgrade, but you’ll need ocelot for step one. And don’t even think about trying to make an ammo pouch out of any of the cloth you’ve just got lying around. That shit needs freshly caught sharkskin for some reason. Bullshark, not hammerhead. Duh.

I swam out here just to see if I the game would let me, and I think I fucked up

There’s a lot of this crafting, and a huge amount of time and effort has obviously been invested to ensure crafting all the best stuff absorbs almost as much of your time as possible. There are few things more depressing than having to explain to somebody that you just spent four hours hunting in order to build a bigger loot bag, only to have to admit that the not animals, nor the bag, nor the loot itself is actually corporeal. It’s just there to make the game easier.

It’s a shame, then, that it’s never very difficult to begin with. It’s not a new problem, but the combat of assassins creed games is pretty much always just counter-instakill. Or break-guard-instakill, if it’s a tougher guy. The long ranged riflemen offer a bit of a problem, but by the time it gets serious you’ve got a silent long ranged weapon, so as long as you see them coming there’s basically nothing to worry about. This whole thing is basically a power trip, and the only thing between you and gory victory is the amount of time it takes to finish the (unnecessarily) lengthy missions and gather enough resources to make your ship unkillable.

I’ve also just found out they’re selling “time saver packs” as DLC, which are basically a way for you to spend more money so you don’t have to play quite as much of the game. Now that’s some real bullshit, right there. I always thought than unnecessary boring grind was unintentional problem with stuff like this. a flaw. It feels like somebody at Ubisoft noticed the problem. They knew that the game was, at times, a tedious grindfest. But instead of trying to make it more interesting, they decided to see if we’d pay them to have to play less of it.

Well, jokes on you Ubisoft. If I want to stop playing of your game I’ll just fucking do that.

Just as soon as I’m bored of having naval battles of while listening to old Mastadon albums.
(You know the one)