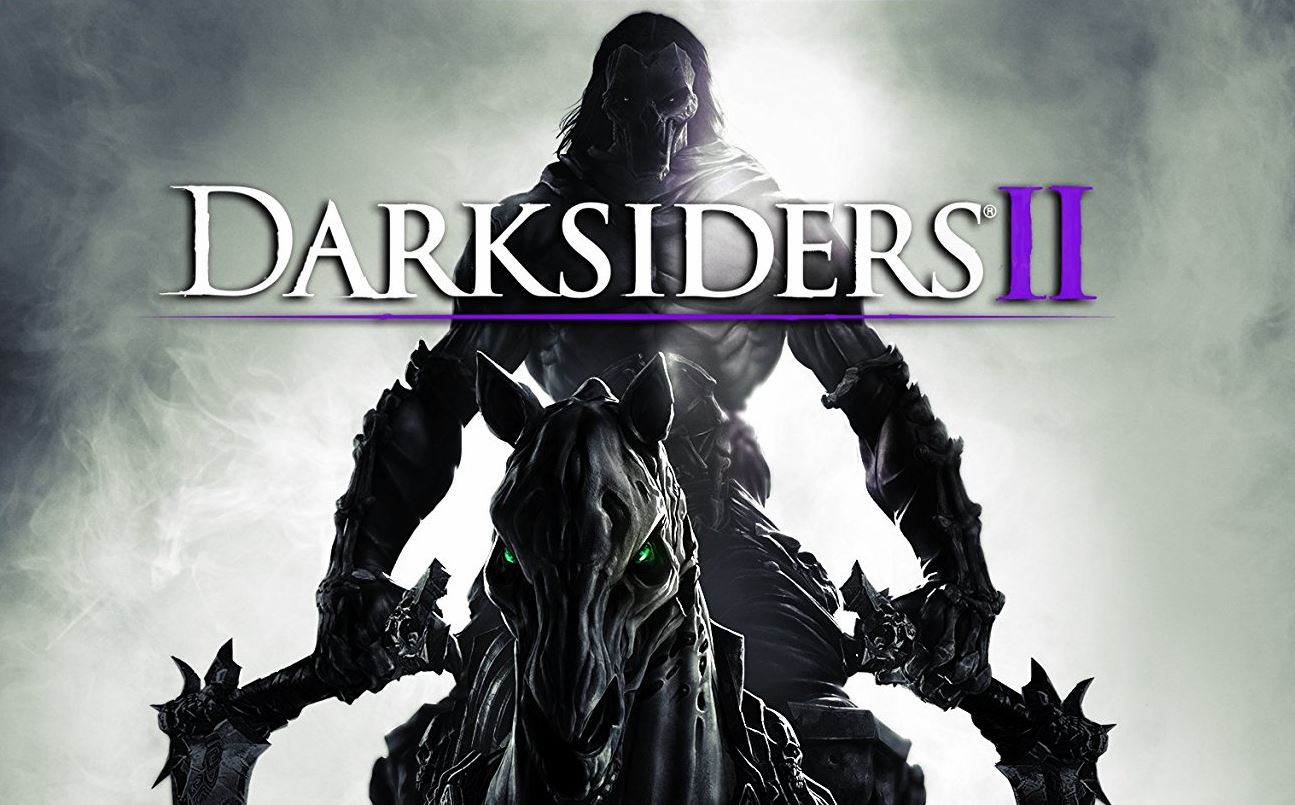 Sometimes a game catches your eye because it’s got an interesting concept, or because it promises new and powerful technology. But I didn’t come to Darksiders 2 for any of those reasons. I came to Darksiders 2 because the protagonist is fucking Death. As the second oldest being in existence it rarely gets more epic than that. Before I grease my scythe and find my fancy going-out cowl though, I’ve got to address the great rotting elephant in the room. Death, in this game, is played by Eddie the ‘ead. I’m serious. Apparently the Iron Maiden mascot, during his awkward teenage years, starred in a video game, and we’re only just finding out about it now. Oddly enough though, he doesn’t seem all too proud of the role, hiding his features behind a curtain of lank, greasy hair and a ten dollar wall-mart Halloween mask.

So, if you’ve ever wondered what Eddie was up to before he hit the big time with the Maiden boys, you are clearly dangerously mad. He’s fucking fictional. Of-course, if you’re going to represent the combined manifestation of everything that ever died, It’s not exactly going to be pretty. Except he’s not really that, either. Turns out he’s something called a “nephelim”, a combination of daemon and angel, and he’s called “Death” and wields a scythe because… I don’t really know. The other horsemen are War, so far so standard, but the other two are Fury and Strife. It can’t even stick to the myth it’s aping. And the plot certainly doesn’t serve to cement his character. The game revolves around death’s struggle to undo the Apocalypse and resurrect humanity. Perhaps I’m cynical, but this struck me as more of a campaign against redundancy than any actual heroics. This lack of focus is part of the game’s problem. There’s a heaping of Christian apocalyptic mythology, horsemen, a single creator and destroyer and the like, but it’s mixed in with some heavy Nordic influences; Yggdrasil, here the “tree of life” and a Valhalla-like realm populated by giant, vaguely Celtic “Makers” lean fairly heavily in that direction. In terms of art style, this is all to the games advantage, there is some fantastic variation and there’s not a vista in there I wouldn’t have airbrushed onto my car, and most of them wouldn’t be out of place as the backdrop to a Turisas gig. Everything drips with the refined essence of “fantasy epic”, and as a setting, it works fantastically.

In terms of game play however, this lack of focus is calamitous. It could easily be described as a action adventure puzzle RPG, but until over half the way through, all the puzzle solutions are the same; put the ball in the hole. It requires all the intelligence and wit of a game of crazy golf, and thanks the repetitive level design and the fact that all the interesting puzzle mechanics wait about twelve hours to get introduced, the ball and hole based puzzles take forever. Which, ironically, might just be the most metal thing about this game. Before this, the only way you’d ever spend this much time and this little effort thrusting balls at holes would be if you were a member of Judas Priest… rimshot

Besides the fantastic setting and the golf, though, What remains is a fairly standard hack and slash, punctuated by some truly impressive boss battles. Death isn’t the monster truck in New Rocks that his predecessor was, though. Possibly to attend to the old proverb about death and sealed containers, he’s somewhat more nimble, both when it comes to getting around and the combat itself. And at this, admittedly, they do a damn good job. He’s a lithe, lanky bad-ass, scaling walls and slaughtering villains like some combination of a Viking berserker on steroids and a chimp. On speed. …I should buy a van

It’s all a little on the easy side, I noticed, but that could be put down to the developers being true to the character. You’re playing as the one earthly certainty, after all. I can’t help but feel like the bad guys where being monumentally stupid when they bothered to turn up to the fight in the first place. Surely, when you pick up your sword and put on your armour with the intention of fighting death, it’s a forgone conclusion that you’re going to lose. I mean, wouldn’t it be much smarter to just stay at home and check yourself for lumps?

I suppose that’s my overarching issue with this game. It’s confused. It draws heavily from the judgement day ideas of Christianity while throwing away all the details that make those ideas interesting. It borrows heavily from other video games (the Legend of Zelda series and Portal, to name a couple) but it forgets the reasons those games were compelling. It’s an interesting grab-bag, sure, and anything that pilfers from so many successful titles is sure be decent, but there’s nothing it does that isn’t done better, elsewhere.