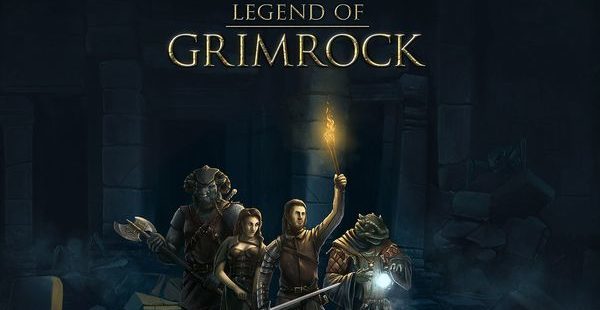 Although this game is fairly recent, it feels more like a retro classic than anything else. Which is great really. It is as close as you can get to a computer version of tabletop D&D, crawling through 13 levels of dark, oppressive dungeons to earn your freedom.

Its hard not to draw comparisons to D&D when playing this game. You create your party of 4 prisoners, assign attribute points, skills and classes. You have a choice of 4 races: human (the all-rounder), minotaur (fighter), lizardman (rogue) and insectoid (wizard). Your party moves as one around the dungeon, scavenging equipment, killing monsters, solving puzzles and discovering secrets. And there are a lot of secrets and puzzles. Just like you’d expect from a dungeon. They take a variety of forms, from finding the secret switch on a wall panel, figuring out the cryptic clues left around the dungeon, or appropriate use of items found lying around. As I said, very D&D. These start off relatively simple: a clue being something about illumination, so you put a torch in a slot on the wall. By the end of the game your rearranging letters from four separate clues that make no sense into something that tells you what to do to get the item in question. Even the final boss fight has a puzzle element to it. Its all great fun to experience, and there’s no hand holding from the game itself. The second most intimidating cube I’ve ever seen, behind the Borg.

It was never crushingly difficult, but I was playing on normal, on hard I got killed by the first monster, which was quite disheartening. The combat is simple, right click on which weapon you want one of your party to swing at the enemy. The 2 on the back row can’t reach with normal weapons. They require a spear or ranged attacks to be helpful. A fully levelled archer meant my party was steam-rolling over most of the opposition. Magic isn’t a simple affair either, which it shouldn’t be really. Right clicking on your mage’s weapon will bring up a 3 X 3 grid of runes. It is your job to figure out what combination of these runes will cast a spell. You find scrolls around the dungeon which tells you some of these, but they can be figured out on your own. They aren’t stored anywhere either, so you’ll have to keep your scrolls on you at all times. This, of course, takes up valuable inventory space and weighs you down. You need that space for alchemy ingredients and food. I forgot to mention that, your party gets hungry, so you need to feed them regularly or their health won’t regen. Its a surprisingly nice addition, it adds to the overall feeling that you’re trapped in this mountain, and may have to live the rest of your life looking for an exit. There aren’t many monsters in this game that don’t intimidate slightly.

The monsters are varied and look nice, with some interesting choices. There are skeletons, ogres and slime, just like D&D, but there are giant snails, for some reason. The ogres are a particularly intimidating foe. They are one of the only foes that can damage your whole party with a single attack, and deals devastating damage to all of them, so the squishy mages and rogues are in trouble, and the fight requires more tactical gameplay to survive. This was the first fight that put me in serious danger, and happened at about level 4 or 5, so fairly early on. It really upped the difficulty form there, with fights against multiple enemies and being ambushed from behind by monsters hidden behind walls becoming normal. You have to have eyes in the back of your head on some levels, because enemies respawn after a while, and surprise the crap out of you. I advise resting on every level, as this is where most of the back-story comes from in the form of dreams. Be warned though, monsters can rudely awaken you from your slumber, which gave me a minor shock every time it happened. But why shouldn’t it? They are trying to kill you after all.

There isn’t much more that can be said about this game. Its mostly simple stuff, with some more complex mechanics thrown in. There is as much story to it as you want there to be, because you have to seek it out. When you’re done with the main story, there is plenty of user-created content to throw another adventuring party at. Many of these, surprise surprise, are based on classic D&D quests, or D&D is the main influence for them. For the price you pay on Steam, it is well worth the money. The main story, which is all I’ve played so far, took me 13 hours to complete, which is a decent length for an indie title. And an incredibly fun indie title at that.