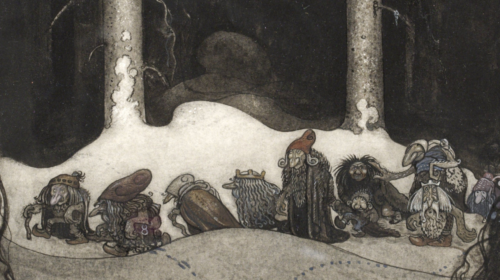 Life Beyond The Real: The Legacy of John Bauer

If you have paid attention to the Dungeon Synth scene within the last few years, you have seen the work of John Bauer and more specifically his illustration "Ännu sitter Tuvstarr kvar och ser ner i vattnet" (Still, Tuvstarr sits and gazes down into the water). This watercolor was a favorite among Dungeon Synth fans for its vintage quality in fantasy art and the deep folkloric traditions of Swedish myths. The painting came in a collection of other myths which were published in the 1907 anthology "Bland tomtar och troll" (Among Gnomes and Trolls). This painting was popular at its time which was used in a shampoo ad in the early 20th century and later in the 90's as a cetnerpoint for a nature conservation campaign. For as relativity obscure John Bauer has become int he canon of art and even fantasy art, Tuvstarr has become a beacon for many people to find his work. Even though Tuvstarr has been used in various ways, the lure of imagination and myth is still potent today as it was over a hundred years ago.