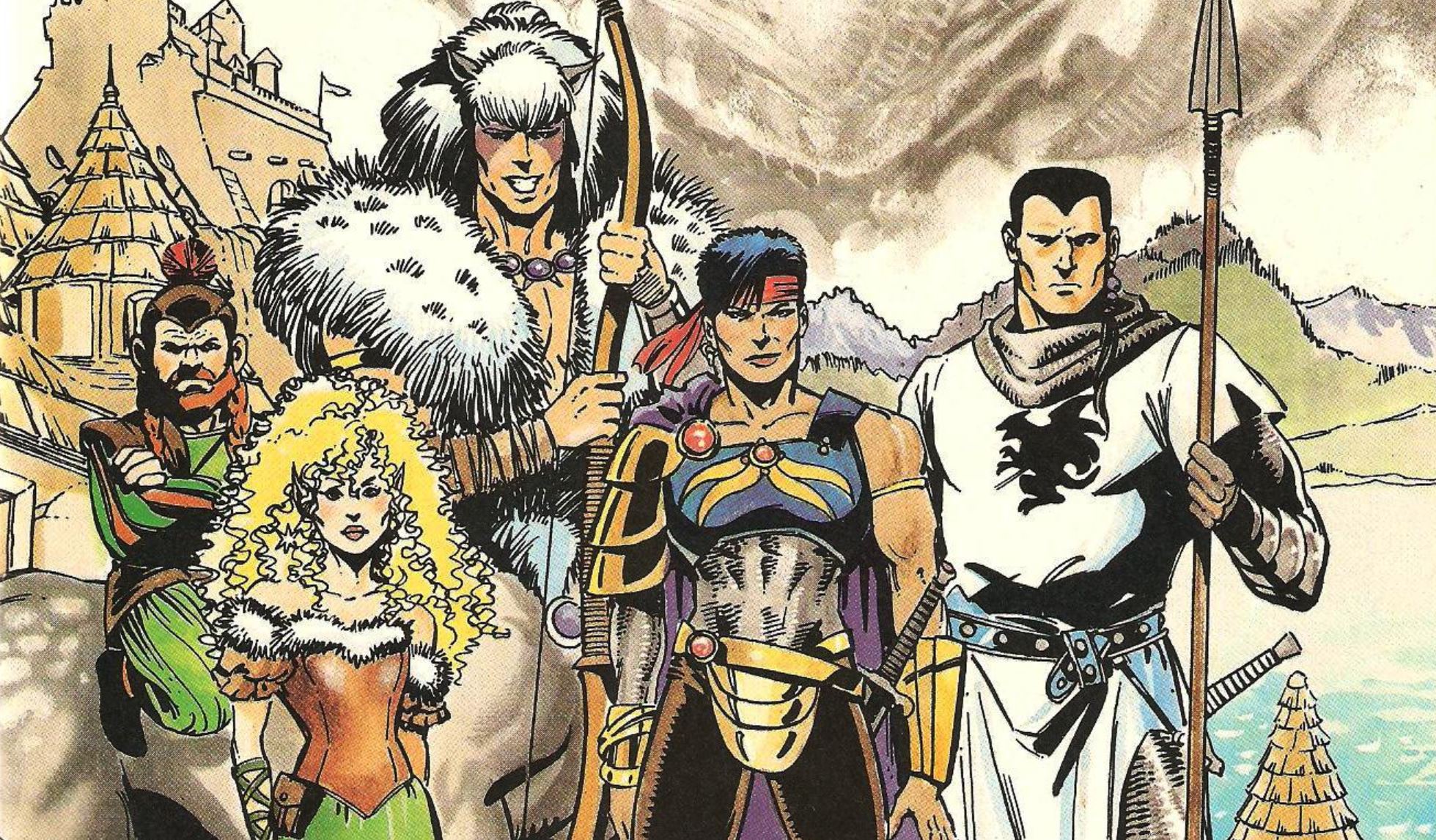 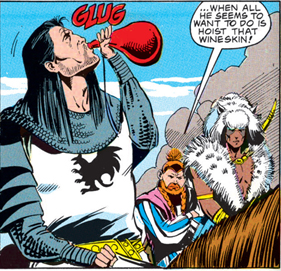 Advanced Dungeons and Dragons, the comic, takes place in the same lands as the Forgotten Realms comics. Forgotten Realms was like a big pre-made world where lots of things happened all the time. A brave paladin Priam Agrivar, who would later have an expanded adventure in the Forgotten Realm comic, is now just a guy having the worst time of his life when his arms are shriveled up by an evil demon warlord named Imgig Zu. Volume 1 of Advanced Dungeons and Dragons collects the first 8 issues, or 2 arcs of adventures. The first arc details the aforementioned Priam Agrivar’s backstory, particularly his fall from paladinhood after his father gets death blasted by a demon warlord named Imgig Zu. Imgig Zu provides the narrative focal point as the antagonist who wants nothing more than to control, I do not know, something. Maybe the universe, the universe sounds good. Though playing old advanced Dungeons and Dragons storylines are fun due to their cardboard narratives, the one dimensional narrative gets old really fucking quick in comic form. Oh, it also gets really strange.

Priam Agrivar, our shining paladin, is struck with a withering spell that make his hands super tiny. Devastated because he can’t paladin anymore, Agrivar turns into a drunk and hilariously drinks with his tiny hands. Agrivar’s fate crosses with, of course, an unlikely group of characters including a strong female gladiator named Vajra Valmeyjar , a cranky half elf named Onyx the Invincible, a fairytale princess elf named Cybriana, and a fucking centaur called Timoth Eyesbright. Yes, a centaur. This is what happens when you let a character go off the prescribed race list. The first half of the arc is split between Agrivar’s eventual redemption, which includes finding gauntlets that make him whole again, and the defeat of Imgig Zu/creation of Kyriani. Oh, who is Kyriani? Just the magical fusing of two twin sisters, the good elf half, Cybriana and the evil drow half, Kilili, who was helping Imgig Zu free his trapped brethren out of a crystal prison. Do not worry, it is not as interesting as it sounds. 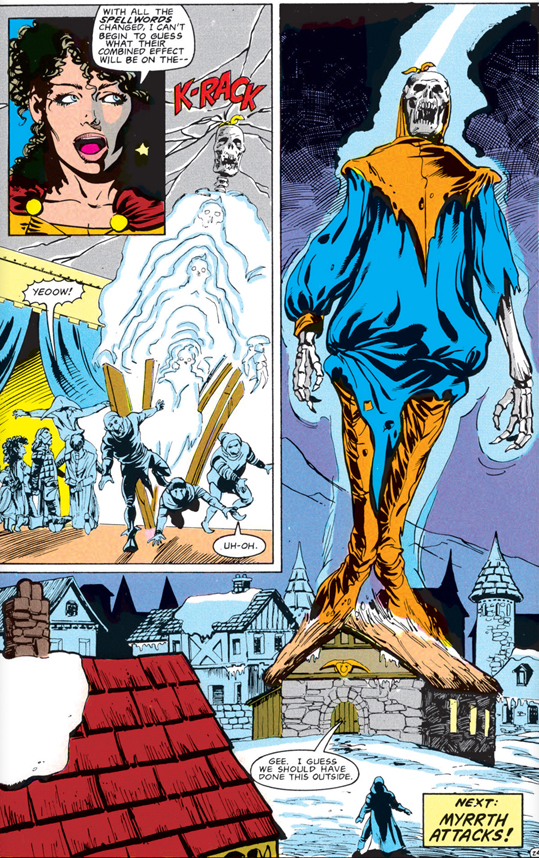 Does shit like this just happen on such a regular basis in Waterdeep that no one says anything anymore?

I do not want to disparage the first narrative too much as it was sort of written by Michael Fleisher. Fleisher’s resume, which includes Savage Sword of Conan, 2000AD, Warlord, and the 80’s run of Ghost Rider, all speak to a competent creative mind, or at least one that writes really cool titles. Advanced Dungeons and Dragons feels like a story that Fliesher started and then sort of handed off to Dan Mishkin, who would see the series until its burial. This means that the talents of Fleisher are limited to a four issue arc and never leave the confines of under developed and ineffective good start. This is painful given that the world needs a really decent Dungeons and Dragons based comic to make sense.

If I ever sound critical of this comic it is because it has so much potential to be amazing. In the back of each issue are stat blocks to allow would be players to live out their own adventures with these characters. That is goddamn amazing. Additionally, after the first story arc, the group of adventurers set themselves up in a local tavern and accept random quests that sometimes close in a matter of issues. This small scale scope isn’t a drawback rather a benefit for a comic advertising Dungeons and Dragons. It is Dungeons and Dragons. In some strange universe, given the right amount of writing, advertising, artwork, and focused target audience, this line could have been engaging. Instead, we get stories like the next one about a giant corpse of a former jester terrorizing the town of Waterdeep like Godzilla. Trust me, not as interesting as it sounds.

Advanced Dungeons and Dragons is not a terrible comic rather just one that does not live up to what one would expect given the name. The creative team is a decent lot, which sometimes border on the under utilized. The pencils by Jan Duursema, who may be known to Star Wars fans for her work in the Dark Horse series, starts out clunky but becomes elegant in the later issues. This combined with flat colors by Matt Webb and Michael Whitmore makes this a visually pleasing attempt at immersion. Even “the Spirit of Myrthh,” the second story about the jester corpse is silly yet unoffensive. I am completely open to the possibility of this title hitting a creative groove in the next collected volume but at this point it is near dead on the table. 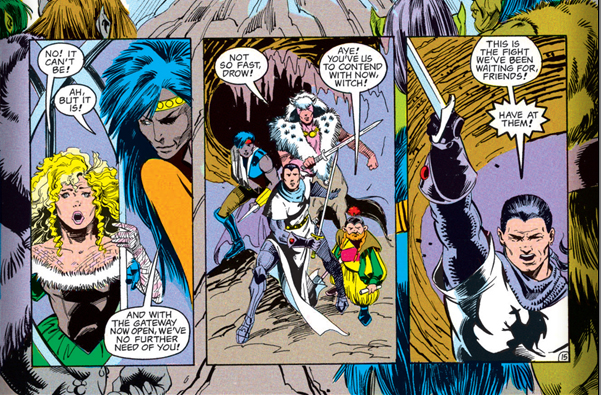 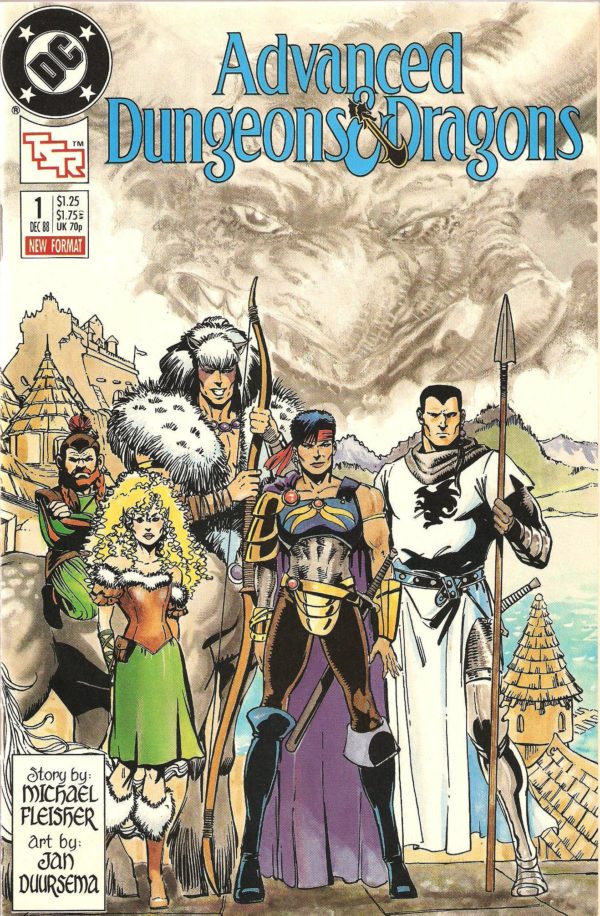