SAVAGE TALES OF CONAN THE BARBARIAN 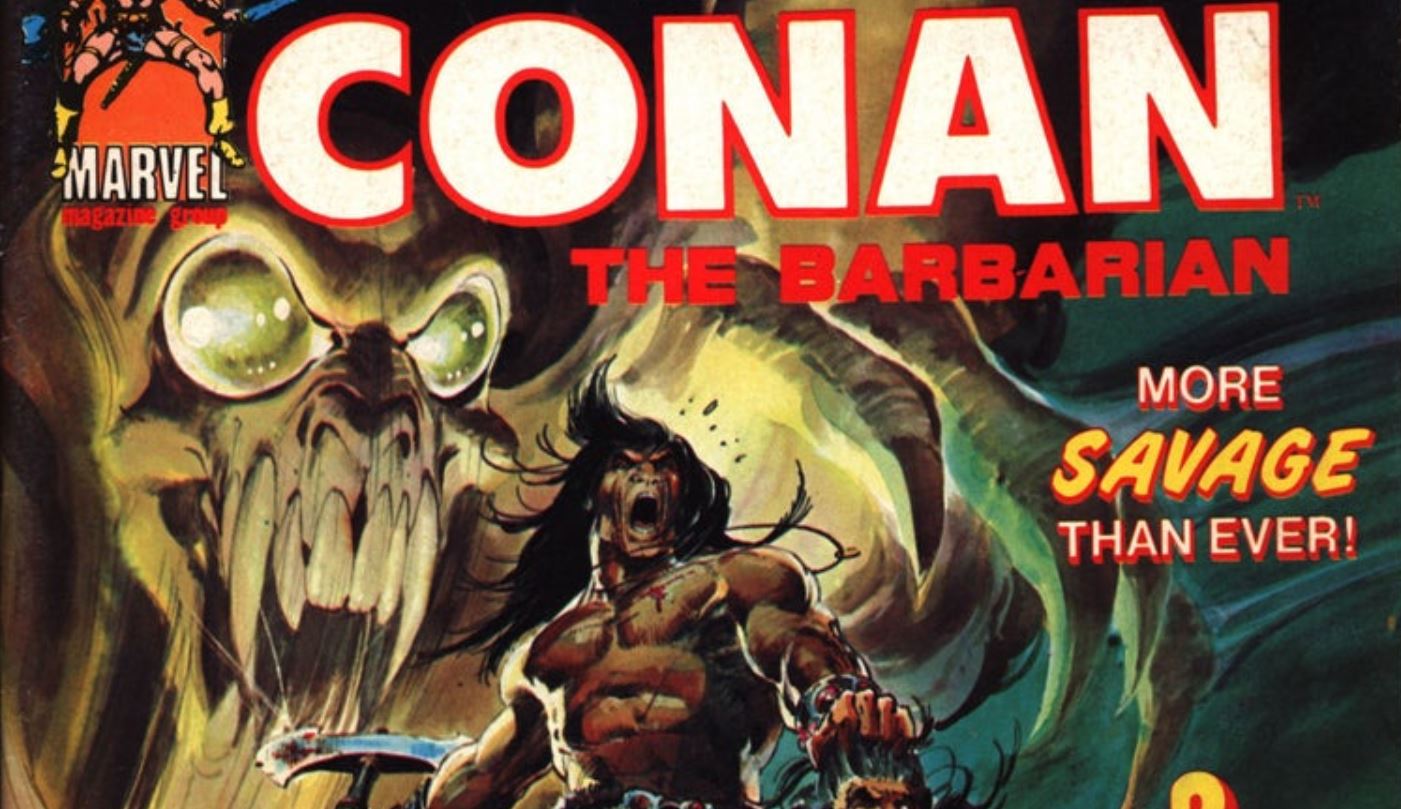 While there are newer titles available, I feel that there was a golden period for fantasy comics that hit right around the 70’s into the 80’s. This golden period, in my opinion, was specifically related to the subversion of the Comics Code Authority, established more than a decade prior. While comic books were under strict guidelines of content and theme, comics that ran in magazine publications could do whatever the hell they wanted. Much in the same way underground Comix were sold in head shops and artsy bookstores, fantasy magazines allowed viewers to become immersed in violent fantasy without any stiff bureaucratic censorship. And who are we declaring champion for this round? Motherfucking Conan.

Savage Tales was a prelude to the longer running Savage Sword of Conan. These two magazine publications also differed from the comic series Conan the Barbarian, which was still under the vice of the Comic Code. The funny thing abut all of this is that the same writing and illustrative teams were working for both. While it was all high clean adventure for Conan the Barbarian, Savage Sword splattered the walls with blood, guts, and implied sexual violence — all of it pretty gross. The first 5 issues of Savage Tales collects the work of Conan archivist Roy Thomas (who also scripted Almuric) and Barry Windsor Smith (who was just highlighted on our Facebook page). For about two years, Thomas and Smith worked through some of Robert E Howard’s most memorable and underrated material. This was most likely presented on the shittiest, cheapest made paper known to man. Pulp, for a short point, thrived in eternal glory.

Ah yes, the best way to open any story — over a field of steaming entrails.

Frost Giant’s Daughter was one of the first and also famously rejected stories by Conan creator Robert E. Howard. It depicts a young Conan traveling through the frozen wastes of Nordheim following a particularly hefty battle between Nordic gods. The Frost Giant’s Daughter is heavily steeped in Nordic mythology, inspiring the creation of the primary vixen and antagonist, Atali. Not fearing any sort of frostbite, Atali is a white skinned nude goddess who mocks and tempts Conan as she bounds through the snow. Conan, being not of entirely reputable stock, chases after her right into a damn trap of her Frost Giant big brothers. Goddamn it Conan. Because Conan is, well, Conan, he flattens Atila’s brothers and then proceeds to threaten her with some warrior ravishing. Luckily for everyone involved, Atila gets beamed up by her father Ymir and Conan passes the fuck out. Conan then wakes up much like in Wizard of Oz and relates his story to other less important people surrounding him.

The Frost Giant’s Daughter story acts as a pilot for both Smith and Thomas to move on to a more mature magazine format. Subsequent adventures include the three part serial Red Nails, which originally ran from July to October in Weird Tales during 1936. Red Nails sees Conan teaming up with Valeria, a competent female protagonist whose nautical plundering has made her a legend among pirates and seafarers. Conan and Valeria get caught in a closed adventure set inside a roofed city where two factions, the Tecuhltli and the Xotalancas, have been fighting a blood feud that has left no heirs and will result in the extinction of both tribes. The story’s title comes from the grim toll of lives carved on a black pillar which is counting down to zero for both sides. Aside from its magical elements dealing with an exiled magician Tolkemec (who fled down to the city’s catacombs with an unspeakable monster) and that one part where two girls were spanking each other on a bed, Red Nails is a surprisingly sober tale about the futility of warfare. I stand by my original statement. Oh, I forgot about the part where Conan fights fucking dinosaurs.

The Savage Tales run is rounded with three concluding one-off adventures presumably written by Roy Thomas. Secret of Skull River, Night of the Dark God, and Dweller in the Dark all involve Conan getting mixed up in some kooky adventure usually leading to a fight with a behemoth of an ancient demon. Dweller in the Dark is exactly what I just mentioned finding Conan taken hostage by a mad queen and then having him, and the slave girl who flirts with him, thrown into the monster pit. Conan manages to not only throw the mad queen in with the monster but gets the slave girl as consolation and is greeted by cheers from the kingdom because no one really liked that queen bitch anyway. This seemingly silly story illuminates the fun and charm of Conan where regicide and grey morality lead to new friends and possibly free drinks. 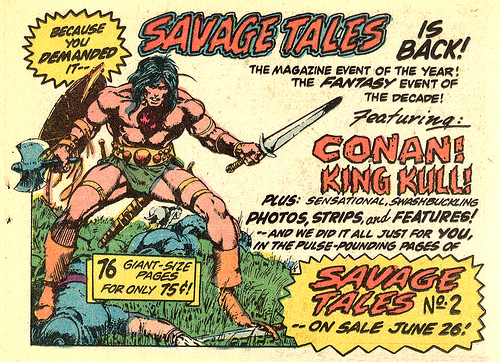 Savage Tales would eventually be restarted as Savage Sword of Conan and would run for twenty years. Though not incredibly popular, except for maybe a few people who collect them on Saturday mornings at flea markets, the series could be thought of as an artistic success. Howard’s stories and further adventures of the character ran for a niche audience under the close supervision of Thomas and later artist John Buscema. There are 235 issues of Savage Sword of Conan floating around in patchy completion. For anyone running across one, not only is the story and art fantastic, but the ads and other features like Red Sonja and Kull made this series indispensable for anyone interested in Howard’s world of sword and sorcery. 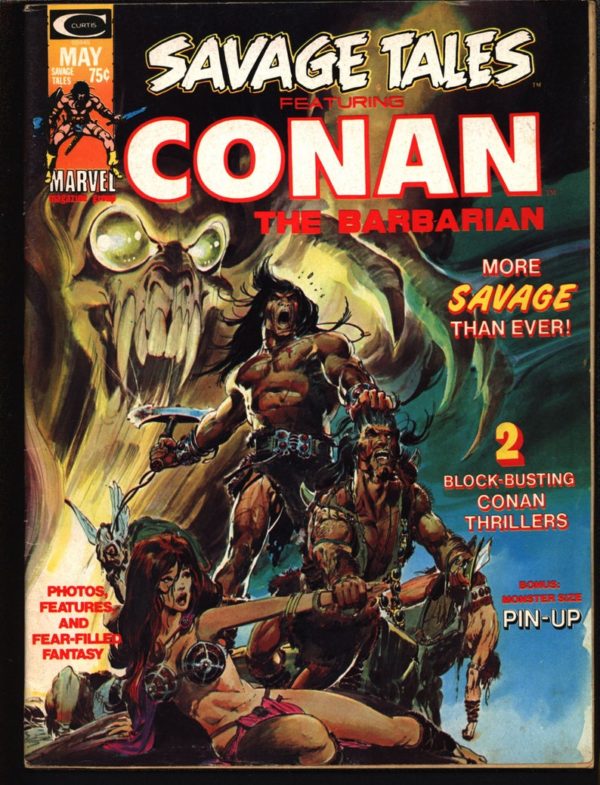