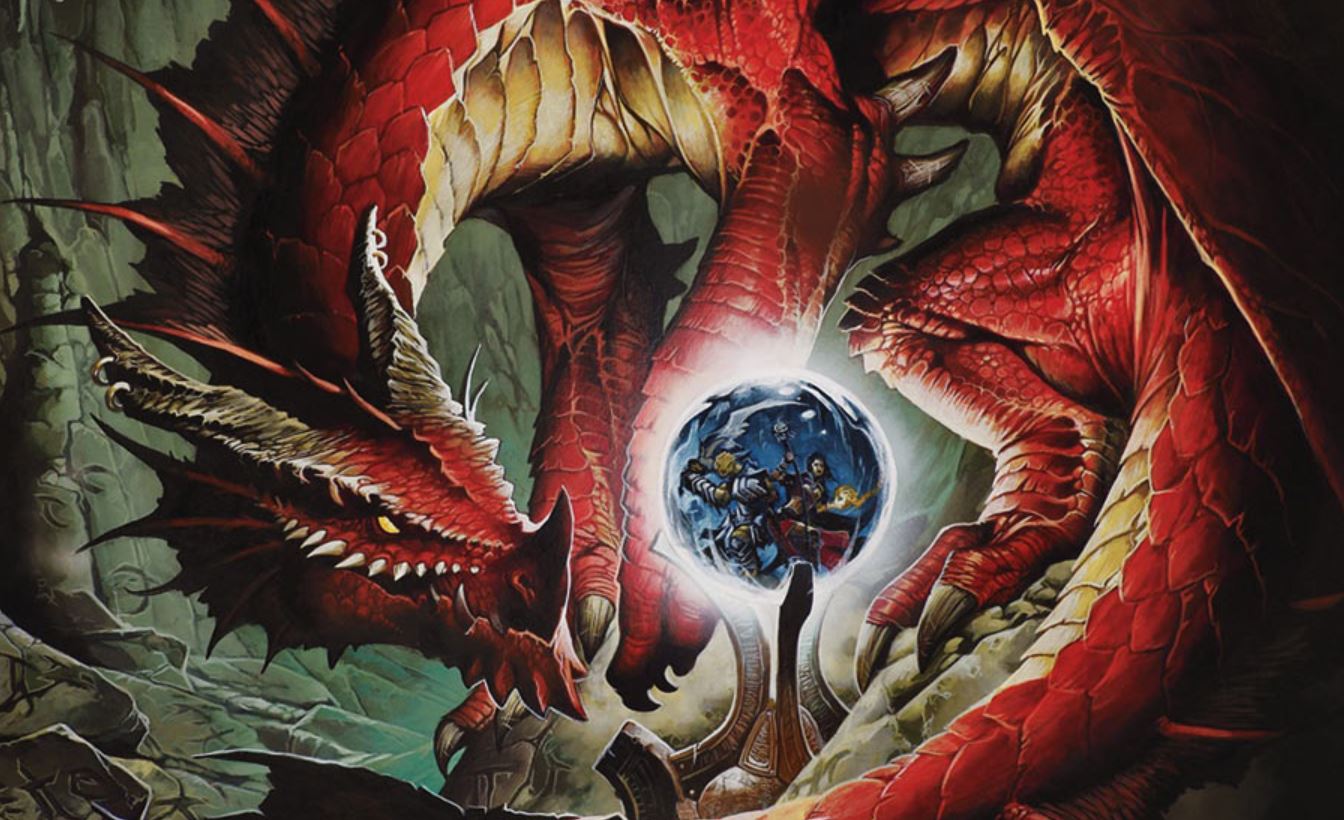 When you write a comic for the Dungeons and Dragons game, there are a few things you can expect from the story. As the writers and artist can not drastically change the universe which has been building for a few decades, readers can expect a certain level of uniformity when dealing with the world. Additionally, since the comics have historically acted more as a supplement and possible marketing hook, one can expect characters and setting to not stray too far off the path. When you read a Dungeons and Dragons comic you are reading a module with every RPG trope crammed into the page as possible.

The Dungeons and Dragon comics have always been supplements to the actual tabletop roleplaying game. This can be seen by their sporadic release and also sparse interest with readers. In the late 80’s several series appeared to coincide with the release of the 2nd edition of Advanced Dungeons and Dragons including Advanced Dungeons and Dragons, Forgotten Realms, Dragonslance, and Spelljammer. In the 2000’s, Kenzer & Company released four limited miniseries to run alongside the 3rd edition. It is alright if you have never heard of them as their existence borders on obscure and mythological. Aside from a few webcomics and a couple of single issue events, Dungeons and Dragons never had a full series since the 90’s until IDW resurrected the line. 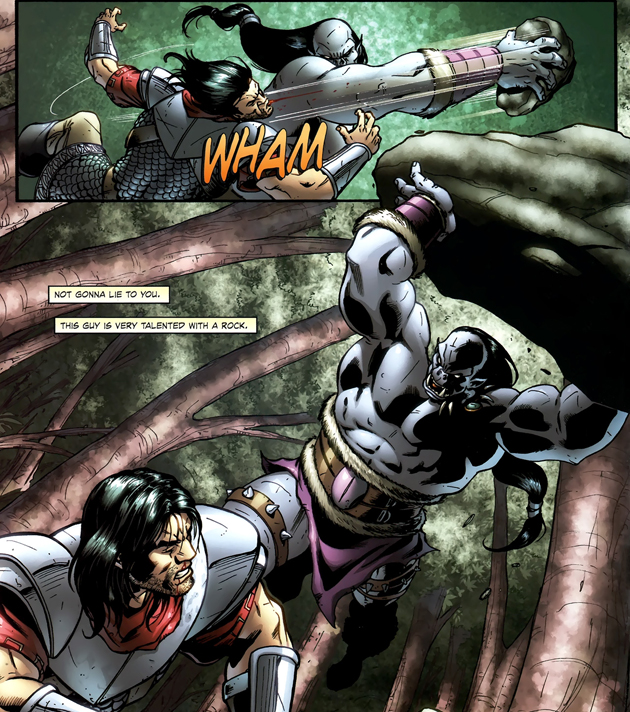 Dungeons and Dragons, under the banner of IDW, ran for 5 years with an ongoing series plus a bunch of tie ins and events that made it a decent chunk of material for comic readers. The comic would tie in to the 4th edition of the game, AKA the edition no one really played. I am just joking but not really. It is funny that the ongoing series is tied to the 4th edition as the characters take on the base classes that would make a reappearance in the 5th editions. Human Fighter, Dwarf Cleric, Tiefling Warlock, Halfling Rogue, and Elf Ranger are all standard classes and in fact half of them show up as stock pregens on the 5th edition. IDWs line did bleed into the 5th edition with the Baldur’s Gate series but certainly came at the middle part of 4th edition’s reign. If you remember, D&D comics have never been about marching too far from the status quo, and to bind that notion to stone is the ongoing series from IDW which is basically like a Starter Box in comic form.

The Fells Five storyline follows a group of adventurers as they get pulled into a plot involving shadow possession from Shadowfell which is explained as a parallel plane, along with the Feywild and Natural world of existence. If you remember this comic follows the 4th edition which the campaign proposed was the Point of Light setting which took place in the Nentir Vale world. The Point of Light Campaign was Wizards attempt to make things loosey-goosey for the DM”s to do whatever they wanted with only a few points of light in an otherwise unplanned world. Fallcrest which lies at the center of Nentir Vale is where the heroes begin their adventure. This may not be of many interest for anyone but me but it is fascinating to see the campaign setting pushed two years after the initial release of the first adventure module Keep on the Shadowfell in 2008. The IDW comic seems to have been released in the middle of the 4th edition right around the time people started to hate playing it. 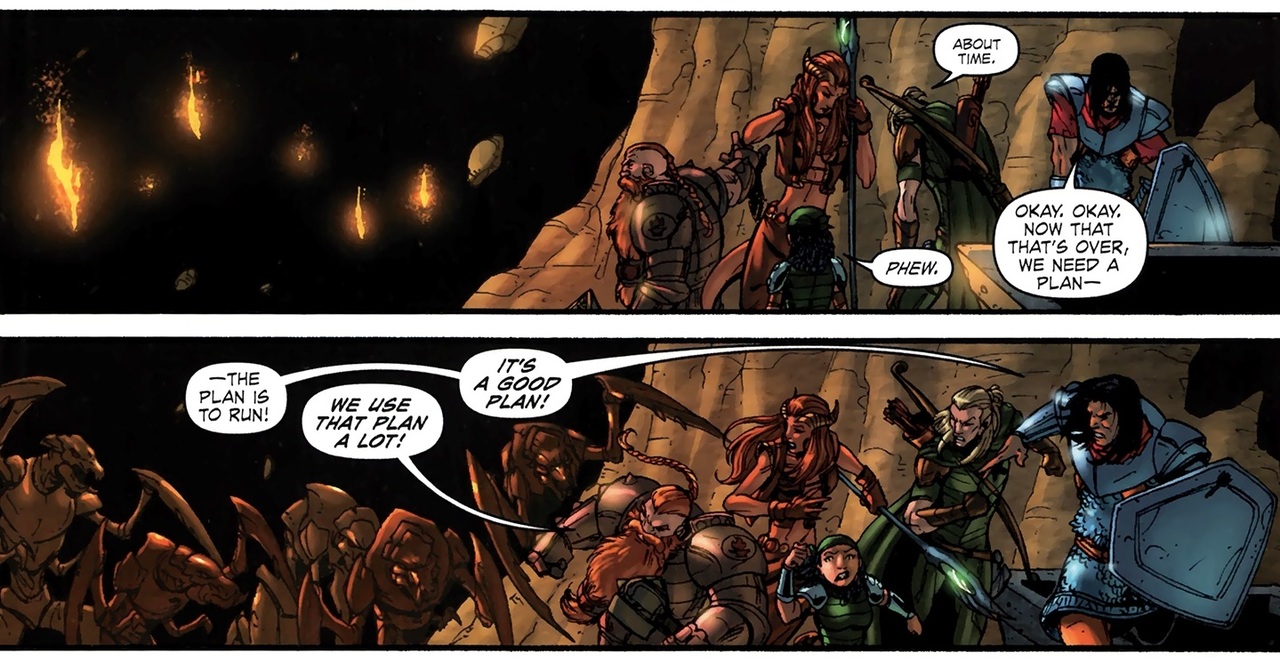 For as trope ridden as the first arc of Dungeons and Dragons really is, the writing from John Rogers (Blue Beetle fame) and art from Andrea Di Vito (NOVA) makes the whole experience fun and as close to a real gaming session as existentially possible. If your gaming group would stop fucking around with side adventurers and follow the DM’s lead, this is what things would probably be like. Every character leans on their archetype and has a chance to make quick quips before engaging in action. The range of villains are evil necromancers, doppelgangers, and Orcs who all do not break their mold as cogs in a fantasy machine. Add to this some funny call outs to the gaming experience like wilderness encounters plus some visual nods to iconic artwork (the halfling Bree stealing a jeweled eye from a statue similar to the one found on the 1978 1st Edition Player’s Handbook) and one has a powerful time killer that both entices new people and gives veterans something to sensibly chuckle over. 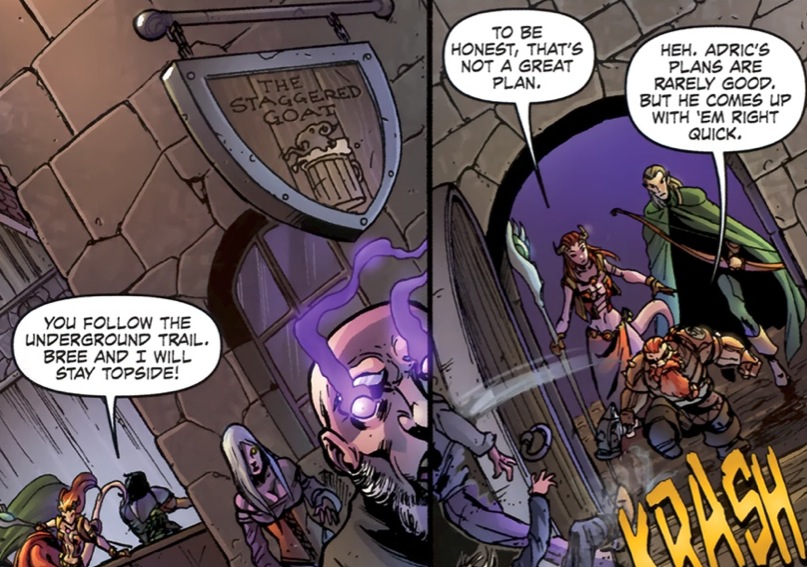 I am very easy to please when it comes to comicbooks, especially ones that follow games that are meant to be supplementary to fringe entertainment. The IDW main storyline for Dungeons and Dragons would run up to issue 15 concluding with three arcs. IDW would eventually start reprinting old D&D comics from Forgotten Realms to Advanced Dungeons and Dragons. I will eventually explore the other miniseries from IDW but for now the beginning of this series, for how little interest there is in it, does a fantastic job of entertaining all ten of us. 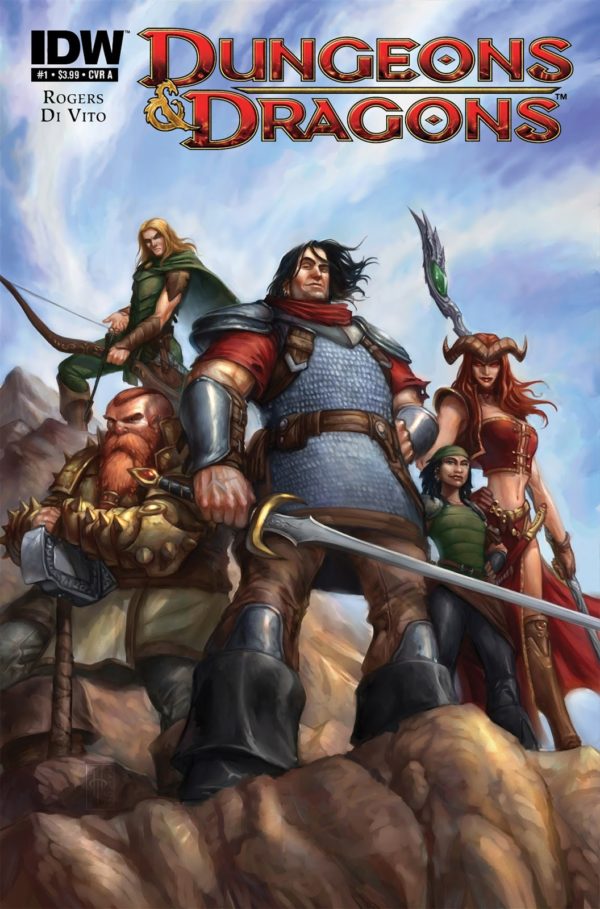