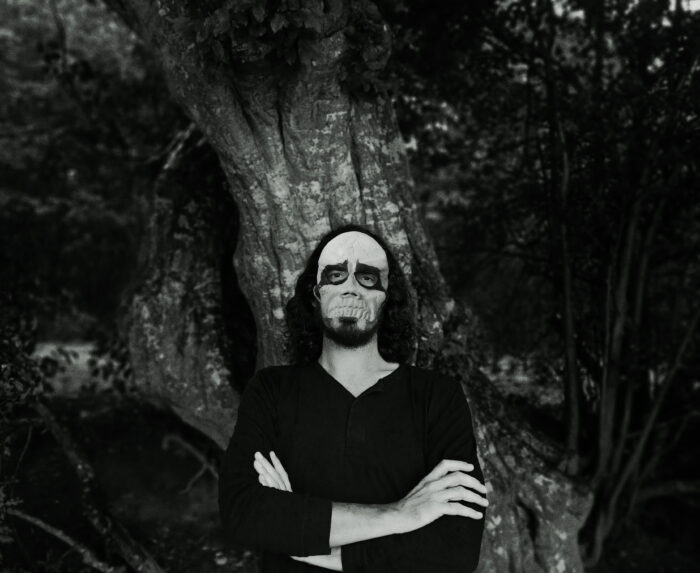 Erang was my first dungeon synth artist and person who acted as a guide into a weird world that has become my home. This French artist and I became acquainted many years past and was gracious enough for interviews and idle conversation about music. I consider him to be a friend I never have met before but our history through this music has been parallel in watching things change.  I will always remember listening to “Within The Land Of My Imagination I Am The Only God” before blindly stepping off into a scene that was intimate, magical, and cosmically arcane. Since 2014 I have listened to Erang’s journey through music has been a quite remarkable building the foundations of modern dungeon synth to traveling beyond the stars in a sort of post DS experimentation all while connecting it to a shared world. For Imagination Never Fails, Erang talks about the record and the music videos which accompanies the songs and his vision for the future. If anything can be said about Erang that has not been said, it that he never stops wondering and never stops moving.

Kaptain Carbon: Imagination Never Fails is the first album since 2018 for you, which to some people does not seem like that much time, but to dungeon synth fans, it is a bit of time. Were you planning this record during the time or doing other things?

Erang: Definitely doing other things… At a personal level it was a time of many changes. I won’t go into details but I had deep changes within my life during the last 2 years… As a result, I needed to experiment things musically as well. I was in the “let’s burn the past” kind of mood. I tried many different things, many that were supposed to be released under another name… but for some reasons it never clicked and, despite having a lot of material for a potential new project, I didn’t release anything… I guess the Kingdom of Erang and the Land of the Five Seasons were waiting in the shadows, whispering to me ” do whatever you want, we know you’ll come back to us!

Without going too much into those 2 years, what styles of music were you experimenting with or what were some of the other names you were planning on releasing music under?

Oh it was all over the place really… Mainly electronic experimentation… As I wanted to start something “fresh” I was deliberately making music that had nothing to do with my usual sound… meaning groovy drum machine, downtempo or breakbeat but also weird strange stuff. But as I said, it didn’t “clicked” and at the end, even if I had material for a full album, I didn’t release anything even if it took weeks and months to make it.

The Land of the Five Seasons is your fantasy setting where every record previous has shaped some aspects of the world. How does this new record fit into that?

Three of the songs come with visuals and in the Bandcamp description you mention these songs were cinematic. Was this album different than others when composing?

Definitely (in fact, there will be at the end 5 videos for this album)… With this album, my inspiration mainly came from the global aesthetic of an era, the 70’s, rather than from a “musical’ influence you know?… Like the Ralph Bakshi animated movies: that was a real starter with this one. The 70’s have a special “grain” all over them, being visually or musically, and I was looking after that. Also, from a musical point of view, I would say that “Arcenstone” from Summoning was also a cornerstone for this album. I don’t know why but this track deeply touches me, it has some unexplainable magic into it. That’s why I wanted to put “voices over”! Then, I must say that the album “The Butterfly Ball and the Grasshopper’s Feast” is also a favorite of mine and inspired me as well… Right now while I’m typing this I’m listening to Black Sabbath “Changes” and that was also something… fucking hell, I love the 70’s! All those references are not “obvious” in the album but I know where they are.

Each of the vidoes takes on a different style from animation to pixel art. Can you tell us about the process of making these?

That was a HUGE work, trust me! Each one had its own process. For “A New Age is Rising”, I browsed dozens of cheap fantasy movies from the 70’s and the 80’s, just to capture 1 or 2 single frame.. Then I took this frame into Photoshop and started to modify it and experiment with it to “animate” it. I made short “loops” and edited them into Adobe Premiere… The moment with the Stone Giant, for instance, I completely made it in stop motion fashion within Photoshop. For “FAR AWAY” it was pixel art. I made it from scratch or digitally modified various sources (I’m sure fans of Secret of Mana will recognize the beginning).. For “NEW WORLD SLAVE” I draw all the colored panels by hand in Photoshop as well… So, yes, each one was a different story. But it was a lot of work so if people are pleased with them, that’s great!

If given enough resources (and time) what would be your vision for the Land of the Five Seasons?

Hm, well, a short animated movie I guess… In fact, what I had in mind with this album at first was to make “THE WALL” or “INTERSTELLA 5555” for Dungeon Synth… Well, I guess I’m still far behind haha! But I made it all by myself, all alone, from the music to the artwork to the videos, so that’s a satisfaction in itself.

Would you consider the Land of the Five Seasons to be apart of the past now that the New Age is Upon us?

No because it is still at the core of my lore and even if you don’t really find trace of it in the track titles of the new album, it is still very much present in the videos and visual I’ve made for it. But I don’t feel the need to put a track about the Stone Giant or the Steppes of Kolm in all my albums tracklisting: I don’t want to force it you know. If it fits I’ll do it but I don’t want it to be superficial. It has to be there for a reason.

Where do you see everything going from here?

Don’t have a single clue… As I’ve always done, I follow my heart and passion… and I never know in advance where that will lead me… So only the future could tell!