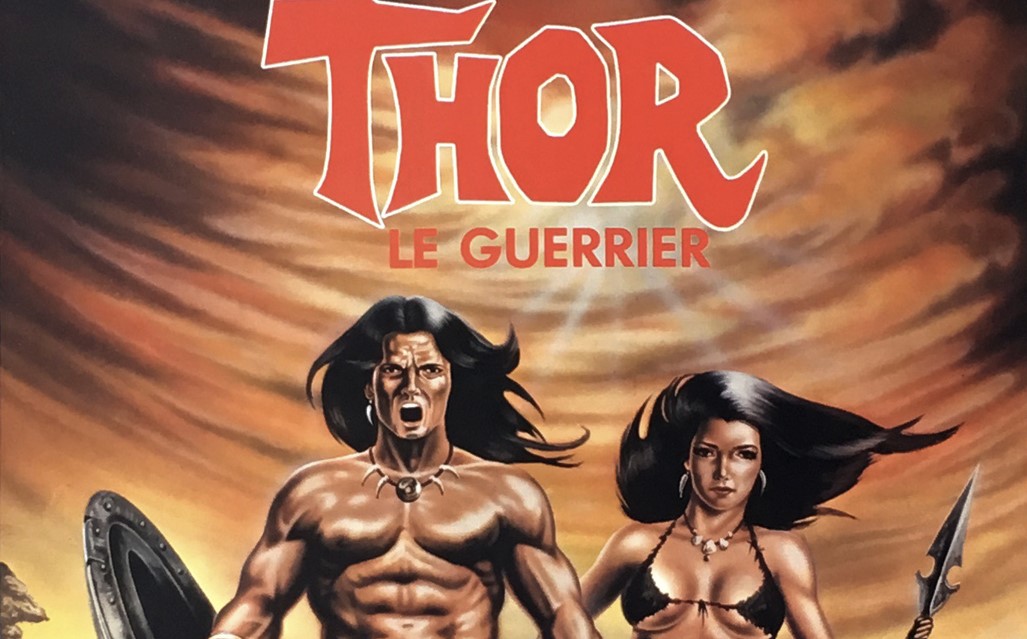 Trying to find information on Thor the Conquerer is difficult as this 1983 Italian film isn’t an obscure cult classic rather a forgotten artifact from a time when cheap movies were being made at an extraordinary rate. It is evident within the first few minutes of the film that the production value, acting, narration, and pretty much everything else is going to be on the level of a high school project. It is also evident at the first battle scene, that this movie is going to be for certain audiences and will cater to the lovers of the ridiculous, stupid, inept, and utterly insane.

When discussing sword and sorcery films, it is important to underscore the cultural impact of Conan the Barbarian (1982). Though it may seem obvious on the effect this film had on fantasy film making, it maybe less obvious to comprehend the effect it had on immediate imitators. There was a small wave of Italian sword and sorcery films made in the years following Conan’s release which tried to immediately replicate its success. Some of these films include the well known Lucio Fulci Conquest but also a score of other films including the forgettable Thor The Conquerer by Tonino Ricci. We’ll talk about Conquest and Fulci’s other film The New Gladiators (1984) another time. Now onto whatever is happening in this movie.

When I say imitators, I an mainly talking straight up clones to rip offs. There are some versions of the movie poster which imitates the stature and composition of Conan the Barbarian. I do not think this film is a Mockbuster, or a film that was inteded on confusing public with a low budget clone, rather the phenomenon of Conan was setting studios, both big and small, on a quest to make as many of these fantasy movies as possible. The Italian wave of fantasy films mirrored a larger surge of fantasy film making which was at times groundbreaking and at others utterly nonsensical and useless.

Thor The Conquerer tells the tale of hunky warrior who has come of age tutored by Etna, the owl sorcerer with gigantic shoulder pads. Thor came under the creepy tutelage of this owl mage following the death of his parents by the hands of Gnut, the rival to Thor’s now dead father. Most of the film shows Thor making his way through the world, not knowing what a female is, losing his virginity under the guidance of Enta and seeing the death of his first love all in one crazy afternoon. The rest of the film is a mix of mythology, stilted action scenes and some really stressed dialogue by our shirtless protagonist.

One of the largest problems plaguing this film, aside from the absence of a budget, is the general unlikable qualities of Thor. Aside from being in impeccable shape and having few lines as not to fuck up the movie, Thor’s actions as a general hero are questionable if not downright odd. Even for being in the sword and sorcery genre where a characters morals are driven by primal desires, Thor’s taking of the third virgin warrior as his female is muddy in the center of the film with only her rescuing him from the camp of savages even more bizarre. This example illustrates a pattern of lazy character choices that do not feel natural rather read from the script of a better made film.

This is not to say Thor is not an enjoyable movie. It is but in a really fucked up way. Late in the film, ultra bad guy Gnut takes Thor’s no longer virgin bride and burns his eyes leading him to water the world like some mythological story. The owl who has guided Thor all of the this time just watches Thor stumble fuck his way in the woods with his arms akimbo like a blind cartoon. It is only after finding a venomous snake, and making a venom salve with the brief words with Taciha, his patron god (whatever) that he can finally go and kick some low budget ass. That was worth it. Perhaps more than the ending fight scene which took place alongside the birth of Thor’s first child via his no longer virgin conquest. Super weird but then again who is really watching this stuff anyway.