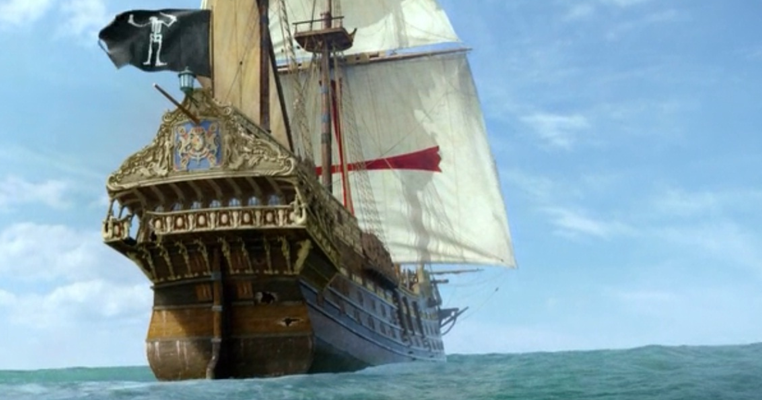 I completely forgot I had watched the entire first Season of Black Sails until Brendan, the editor, told me about Season 2. I believe this is standard practice to release one season in a year, but the space between the close of Black Sails Season 1 and the premiere of Season 2 feels like an eternity. If I remember correctly I was less than impressed at the Starz original series, which attempts to chase the same glory seen by shows like Deadwood, Game of Thrones, and the Tudors just with a different fantasy theme. Though the show follows the exploits of historically accurate buccaneers in the high age of piracy, Black Sails began with an existential struggle between being a saucy historical drama and a ridiculous slab of pulp. Despite either direction they can chose, the strength of the show will depend on focus and the ability to entertain. I have yet to make any conclusion based on the first episode.

If you do not remember, or just didn’t catch the first season, Black Sails follows an ensemble of renegades, scalawags, and outcasts through their personal ascensions to fame and fortune. The show is advertised as a prequel to Robert Louis Stevenson’s 1881 Children’s novel Treasure Island. Because there is little chance an adult show can be successful without exploitation, Black Sails is filled with a healthy dose of gratuitous sex, out of place profanity, and surprisingly realistic violence. In the center of this maelstrom is the overwritten Captain Flint and the highly expected John Silver. Additionally, we have Eleanor Guthrie as the matriarch fence in the port town Nassau, an uninteresting prostitute named Max, a potentially interesting Calico Jack, and a baffling-ly stupid portrayal of Charles Vance. All of these characters sort of hang around Nassau while getting into adventures and shenanigans. The current shenanigan is Flint’s chance of finding a famed treasure ship, which is being guarded on a beach by a Spanish army. Flint has to help his stranded crew get the gold or face execution for pretty much dicking them all over in Season 1. I am glad the trailer took care of spoiling the opening scene of the Season. Yes. Why don’t we surrender to the pirates?

There are a lot of things that come flashing back about Season 1 in the premiere of Season 2. Characters are revisited, with their importance reiterated, so the audience doesn’t completely forget why they are there in the first place. If you remember, Charles Vance took over the fort at Nassau and is now embroiled in an emotional war of attrition with Guthrie. Jack is getting abused by his former crew mates while being a big baby. The lesbian tension between Max and pretty much every other girl on the island is palatable and eventually gives way to a first episode conclusion that may or may not have happened exactly the same way in the first season. The whole atmosphere of Nassau would be stifling if not for the obvious and timed introduction of Season 2’s big bad guy. Ned Low is a cruel and ruthless pirate that, after murdering an entire ship in favor of heisting an unconscious lady, is setting up to be the shows arch villain. Low immediately sets his sites on Guthrie, who short changed his bloodied haul when Low tried to sell it to her. I can foresee the plot of this whole season right now. For future reference, whenever John Silver is along for the ride, things get fucked up.

One of the most, and maybe only, interesting aspects of Season 2 was the flashback in which we are given back-story to Flint and his first meeting with Miranda, the wife of Lord Hamilton. Years before, Flint, called James McrGaw, was enlisted by Lord Hamilton to rid the Caribbean of the growing pirate scourge in Caribbean. This flashback is embedded within the episode and passes almost unnoticed if not for the brief dialogue between Flint and Miranda. If you remember, Miranda is the stay at home widow who has a weird romance with the pastor. I say this went almost unnoticed as the the show has been running on such a straight trajectory that the introduction of a flashback was almost too subtle. Regardless, this time element allows the viewer to, hopefully, fill in Flint’s complex character while watching his greedy quest for power. This is the one redeeming portion of the episode as everything else rolls out predictably. After Flint’s former crew decides to pardon him for his crimes, once there is a successful heist of the Spanish treasure ship, Silver and Flint silently devise a plan to take back his crew, commandeer the ship, and finally get that gold. I mean, what else is he going to do?

My largest grip with this show seems to be that Black Sails continues to toggle between reasonable historical drama and ludicrous pulp. The show is unable to stick with a formula that would make the characters shine and instead tries to hedge their bets and reach for a fraction of everyone. I have said in the past that I do not care which direction Black Sails goes, but I hope that this show becomes more daring than just trying to follow the predictable path of other prime time cable shows. There is no sense in replicating Game of Thrones, but with a pretty good grasp of legend and history, Black Sails could be interesting — this is of course if they don’t keep trying to be something they are not.