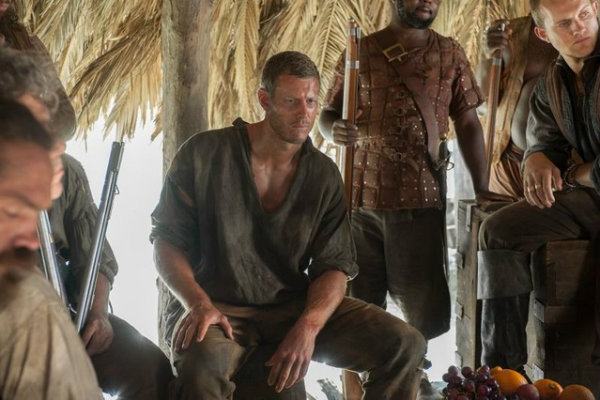 Brendan, the editor here at Hollywood Metal, recently asked me how I was liking the second season of the STARZ show Black Sails. I honestly couldn’t answer because I do not know. This pirate themed historical fantasy has been one of the more schizophrenic shows in my recent memory, similar to a freeway collision of pulp, dry drama, interesting narrative, and downright needless characters. Each episode shifts the equilibrium leading to a ballroom dance around a spectrum of good, bad, and unclassifiable. The middle of Season 2 might just be when one of the many characteristics I’ve come to associate with this show boils to a conclusion and is quickly tackled by the other wielding a knife.

Welcome to the party Abigail.

Let’s make sure everyone is on the same page. Flint is trying to win back his crew and the only way to do so is to attack a ship that Charles Vane has hidden himself away on after stealing a hostage from the truly evil pirate, Ned, who got his ends really early in the Season. Up until this point, we have been given a healthy dose of flashbacks for Miranda and Flint’s backstory and how they ended up on Nassau shooting cannons at forts. With this well crafted stream of information we can conclude that Flint, Miranda, and Miranda’s husband Thomas were in a polyamorous relationship, where Flint and Thomas were sharing more of the love interest. This conclusion was wrapped up well through a series of foreshadowing and signposts making up, perhaps, one of the show’s strongest points. Still, I find it funny that Flint’s bisexuality is a cause for dramatic narrative, where every girl on the island seems to engage in lesbian sex and it is not that big of a deal. Regardless, Flint, Miranda, and Thomas’ love triangle leads to exile for Flint and Miranda and commitment to an asylum for Thomas. Hold on, the reason that all of this matters to the original story is still coming.

If you remember the girl Abigail in the fort, then you will recall she is the daughter of Lord Ash of Carolina. Miranda reveals to Flint that, while he is going to storm the fort, he needs to get Abigail while doing so and bring her to Lord Ash. Why is this convoluted DND plotline introduced? Well, because Ash is somehow really good as getting legislation passed through British Parliament securing pardons for Flint and his men’s atrocities just because they saved his only daughter. My goodness. So all we have to do is go into that castle, save that girl, and the wealthy father will reward us? This sounds like a perfect plot. It should be noted that all of that was revealed with somewhat grace. This was before the episode literally ended with Vance jumping on Flint with a knife and cutting to black. I think it’s time for more silliness. I feel a word of warning is important for the next few paragraphs: Here be confusing plot lines. Goddamn it, does no one go away in this show. Is there an undertow that brings every character to the same 50 feet of island?

If I sound at all surprised at this turn of events, it is because Black Sails begins to spread outside the confines of its own ruts. Flint and Mirandas’ backstory and political overtones is interesting and puts the show in perspective. Jack soon fractures his relationship with Anne after getting his own boat, with the severing of their relationship as the only stipulation. Even Max’s brothel is on the skids after Flint forbade his men to go, lest the secret of the gold get out. For what it is worth, Black Sails begins to climb its way towards something interesting right before it falls into the same pit and begins fighting with itself again.

One of my largest problems with Black Sails is that its location on an island is truly a metaphor for the structure of the show’s entropy. Characters do not leave, rather just team up with someone else for a new storyline. Additionally, characters you thought were gone suddenly return for no reason. If you were to draw alliances and enemies between all the characters in this season alone, it would look bizarre. These alliances also sometimes come with little reason. One example is Anne’s forced breakdown after killing a prostitute. This leads to Anne aligning with Max for no other reason I can tell than a new life. Another example is Dufresne, who has been quartermaster of the ship, and his attempted dissent with Billy Bones, the guy thrown off a boat by Flint in Season 1 who has been found alive after being tortured and released by the Navy. Billy aligns with Flint, sending Dufresne to align with Captain Hornigold, who also has been jilted after being unable to take back the fort that Vance now sits on playing ‘King of the Hill.’ If all of this sounds confusing, just know I left out a bunch of subplots because they do not matter. By the middle of the season, narratives form a tangle of yarn where one does not know who to root for, what to follow, or if any of this even matters.

With all that said, I am thankful to Brenden for suggesting this show. Even though I am critical of it, it is more than entertaining to watch, very much like a ship wreck. Additionally, the show’s underwhelming reception seems to be leading it to be what I had always hoped it would become, which is a pulp narrative discarded by the masses. It is escapism in it’s most undeniable form. Whether or not you will be confused as fuck during that time, however, is still up for debate.