EXMORTUS – Slave to the Sword 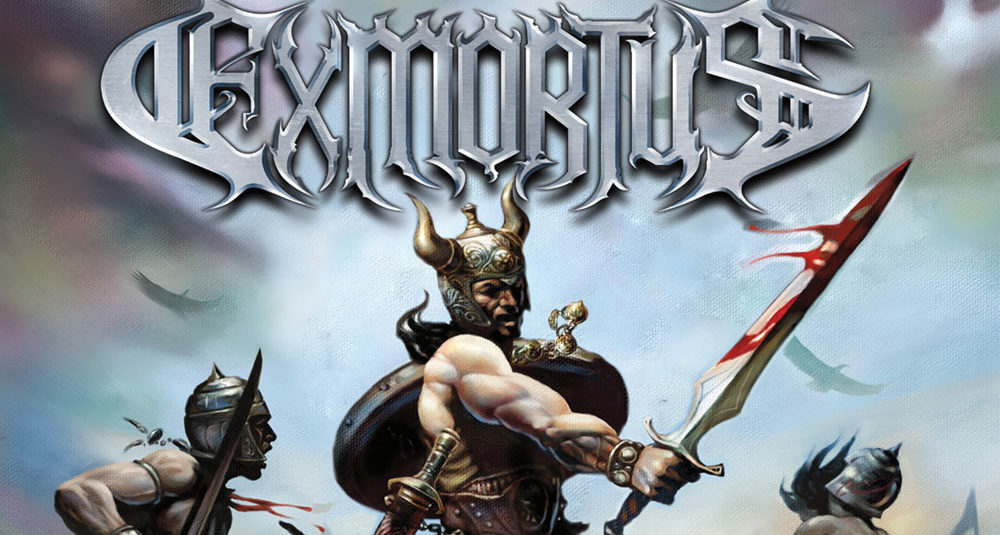 [Full disclosure: I have a relationship with Exmortus in that we have crossed paths several times on the Los Angeles and Seattle metal scenes and I have hosted them on their national travels. I feel the rating is justified but as with anything you read about here, please listen and see if you agree.]

Back in the olden times of 2009, I attend a show at the Black Castle in Los Angeles. Most of the bands on that show are now signed and doing big tours, but two stood out to me much much more than the others: Vektor and Exmortus. It makes me so damn happy that some goods bands are getting what they deserve, especially when I see so many mediocre groups opening the big tours these days.

Exmortus is now on Prosthetic Records and was recently on their first big national tour with Dark Tranquility. They have just released their third album “Slave to the Sword,” and it kicks major ass. Their music spontaneously compels me to unsheath my own sword and furiously headbang while swinging it around. A very high risk of self decapitation, I know, but it is both an involuntary act and completely necessary.

I had the pleasure of playing a show with these guys last year and they are consummate professionals on stage and great company afterwards, for I hosted these dudes at my pad in Seattle along with black-thrash masters Witchaven. We shredded the local metal bar The Kraken and then did some serious old school chillin’. We talked about Manowar, smoked much sacred herb, drank much sacred drink, listened to prog rock and talked more about Manowar. ‘Twas a splendid evening. Since then I’ve eagerly awaited what Exmortus would bring with their next album.

Track by track, your ears are brutally pummeled with neo-classical shredding, tales of metal and battle, sick drumming, and actually audible bass. This album is hard to classify, which is increasingly more appealing to me these days and something I seek now in albums. It’s power, death, thrash, and heavy metal all rolled into a sphere of metallic goodness.

With Slave to the Sword, Exmortus delivers to the fullest. They bring a Manowar-ish glory to table and couple that with a perfect dose of extreme elements for distinction. They have set the bar high for my metal album of year 2014 and I swear I’m not just saying that because they gave my band a shout out on the back cover. Keep it up brothers and the world shall be yours.